ISIS Fighters Carried Out Massacre In Kobanê After Crossing From Turkey 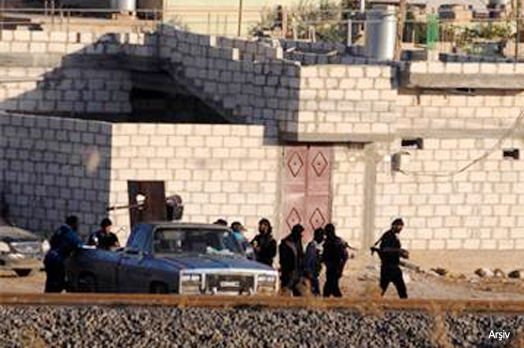 ISIS fighters who carried out a massacre in the village of Sêlim in the Kobanê Canton on September 20th crossed the border from Turkey, according to a report from DİHA and carried by Özgür Gündem.

ISIS fighters are said to have crossed into Sêlim from the village of Göktepe in the district of Birecek in Urfa Province. They proceeded to kill 5 local villagers who stayed behind to defend the village. According to Bavê Osman, a resident of Sêlîm who survived the massacre, “If Turkey had not allowed ISIS to pass into our village it would have been impossible for them to reach it.”

Following the massacre the village was entirely emptied. Osman explained how the youth of the village had stayed behind to defend their homes, saying that “the moment that ISIS started its attack on our village we sent the elderly as well as women and children over to Turkey. The defense unit that we had formed remained in the village in order to resist.However our youth had no heavy weapons. Our unit was fighting with limited means. Our defense units chose a house from which to defend. Following heavy shelling from ISIS 4 fighters in the house were killed.”

Osman cried as he explained how ISIS fighters then proceeded to execute a fifth fighter who they had captured, saying “one of our youth who had been taken prisoner was executed in the village square. They cut off his head in a savage manner. Where is humanity in this? Where is Islam in this? What is their goal? Two neighboring villages are protected by YPG forces. The ISIS gang which entered our village came in through Turkey. If Turkey had not allowed ISIS to pass into our village it would have been impossible for them to reach it.”

He then stressed how villagers fleeing the massacre into Turkey were stopped on the border by Turkish soldiers, where they came under long-distance fire from ISIS fighters. He also described how a large number of livestock had been stolen from the village. Finally Osman called ISIS a terror organization and called on the world to work to “put an end to this savagery.”