A New Interview with Aldar Xelil 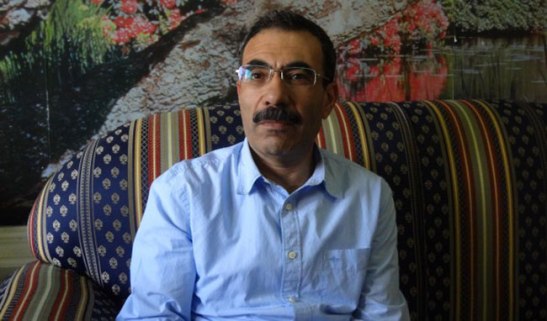 What follows in an interview with Aldar Xelil, a member of the executive committee of TEV-DEM, on the current situation in Rojava and its relations with the United States. The interview was conducted by Mutlu Civiroglu and has been translated into English below.

-Mr. Aldar Xelil, in the televised presidential debate last week candidate Hillary Clinton said that “we will won’t let up on ISIS and we will support the Arab and Kurdish forces fighting with us.” How did you find her remarks?

Indeed they were very appropriate. We must see the reality that in order for there to be a democratic Syria in which all peoples can participate it is essential that there is a force in Syria and that can be a foundation for such a project. Within this framework it is certainly essential to give support to Kurdish forces. However this cannot be limited to military support. It must transform into support in all areas, that is to say political, diplomatic, economic and social support.

-Ok, before we get to these other areas which you have mentioned I want to dwell a little more on the subject of military support. A few days ago there was a special session held of the U.S. Senate’s Foreign Relations Committee. In this session the American Defense Secretary Ash Carter and the Head of the Joint Chiefs requested permission to provide direct military aid to the YPG. They offered a lot of praise for the YPG. What role might these proposals from Washington play in the Raqqa operation. What are the conditions under which the Kurds of Rojava would take part in such an operation? What expectations do Kurds have on this subject?

The truth is that if they want to liberate these areas and to clear it of DEASH then the only active force here is the YPG. The YPG and its constituent elements possess a determined political will. They are not a force that came together out of nowhere. However America must know that for us to move toward Raqqa and for us to accomplish this task together there the proper conditions need to come into fruition that would allow us to take this common stop. For example, we must have political representation at the ongoing meetings in Geneva which are currently working toward a political solution for Syria and we need to take part in the process to achieve a political solution in Geneva.

The second is that from this day forward the governing system of Syria must be a democratic federation. It’s a reality now that we are currently working to develop this system in North Syria. They must give support in order for this to be become the governing system across the whole of Syria. However together with this the military support provided by the YPG and YPJ and the military aid are also important. If these conditions are forthcoming then we will be able to work together to liberate Raqqa and these other areas.

-A short while ago Mr. Brett McGurk came to visit you all. During this visit he made some remarks about the recognition of Rojava’s political system. At the same time you have relations with the American State Department and other governmental organizations. How do you evaluate those who say these developments mark a recognition of a political status for the Kurds by the United States?

This is an important step and it is important, but it is not enough. This is to say that if are to create a future Syria together then the political and diplomatic relationships must be taken to a higher level and enter a different stage.

Much criticism has been directed at the countries taking part in the Geneva meetings for not having included the Kurds in these meetings. Right now it is clear that both America and Russia want the Kurds to take part in any more meetings which take place. Have you gotten any message about this until now?

Right now some things are being talked over and we have an ongoing dialog. Something like this is on our agenda. However it is not only participation but participation with certain conditions. Under what circumstances will we participate? If like before they want us to send one person as a part of a larger delegation it won’t work. There needs to be more debate on this subject. If we are going to participate as our own delegation then there will be some things we have to stay, because we will be there representing a third line. If we are left in the shadow of certain groups which are against democracy, human rights and a democratic Syria and they want us to send one person to work among these groups it won’t work. Our participation would change nothing. For these reason there are certain conditions and requirements for us to participate. This is a subject on which we are holding discussions right now.

-Until now have you received any kind of invitation from American officials or politicians to discuss these questions? Do you have any current preparations or planning for such meetings?

In fact up until now some of our comrades have been in involved in meetings and have been traveling back and forth. Of course [the United States] is in an important place because it functions as a decision center for many different countries and it posses a certain authority. For this reason our meetings have taken on a greater importance and our plans have a broader and more ordered framework. We have ongoing efforts in this area. We will attempt to bring this forward as much as possible. In fact we consider it very important that our officials and those who represent us explain our realities to American public opinion and the American people.

-Let’s talk a little about Turkey and Turkey’s role here. Turkey’s policies against the Kurds of Rojava have been watched carefully here. In these sense there have been important developments and this is clearly visible of late. In fact Mr. Erdogan has openly said a number of times that “America should not work together with the YPG and they must put an end to this.” With this in mind how to evaluate America’s relationship with Turkey in terms of all its views on the Syria problem? Once more, the situation in Aleppo is becoming quite dire, the bombings are continuing, the destruction is at its height?

Turkey has done a great disservice to Syria. From the very beginning of the revolutionary struggle it has played a terrible role. It created paramilitary groups loyal to itself. Within Syria it changed the shape and direction of the Syrian revolution and in fact even changed the entire strategy there. Most recently Erdogan reestablished relations with the Syrian regime against the Kurds and against democracy and solely for the purpose of keeping that area under his control and preserving his foothold in the region. Now Erdogan and the regime of Bashar Assad have become friends. For that reason he has pulled back anti-regime forces under his control and handed them over to the regime of Bashar Assad. They want to do in Aleppo what they have done in Damascus and now they are making way for the groups there [to leave]. What did Erdogan do in the name of liberating Jarabulus? What has he really done to DEASH? In fact what he is hoping to accomplish is to join together under one force both DEASH and all the groups connected to him and to change the objective in this way. They want to use all of their forces which until now were fighting against the regime against the democratic struggle in Syria and especially against the Kurds. Right now there is work underway to centralize this groups in Jarabulus and the surrounding countryside. While these forces are being used against the Kurds on one front they hoping for the Syrian regime to liberate the other parts of Syria. At the same time they trying to bring all other groups under their control or to keep them that way. In fact it is very clear what these groups have done in Aleppo until now. There is a very dramatic and tragic situation unfolding now in Aleppo. There are massacres happening from minute to minute, hour to hour. Civilians are being targeted, hospitals are being bombed. Inhumane things are occurring in Aleppo. There needs to be an international condemnation of what is happening there.

In fact Afrid and the other regions are a part of Rojava Kurdistan. We have for years been working to shape developments in these regions and their aftermath. However in Afrin there is the problem stemming from the effects of its ongoing encirclement, that is it’s having been put under siege. They are attacking Afrin with groups they have brought from Aleppo and other regions. In fact just recently they have started to attack Azaz and Raha. However I believe that we have sufficient forces to unite Afrin, Manbic and Kobane. We also have sufficient forces to open a road or corridor between them. Only then can Afrin gain some strength in the economic and political spheres, only then can it form its own system and emerge from under siege so that they can go stronger as part of a federation in North Syria. When you look at Afrin historically, culturally and politically it is part of Kurdistan. When you read historical documents you see that this region was called the ‘Çîyayê Kurmênc’ or the Kurdish Mountain region. At times it seems that when we talk about liberating this area or opening a corridor to this area people perceive it as if we were talking about a region outside our own. It’s as if we are going there in order to occupy it. However over there is a part of Kurdistan and a part of Rojava Kurdistan. We have been living there throughout history. In fact there are YPG and YPJ forces in Afrin. And the YPG and YPJ forces there are made up of women and men from Afrin. They also want to break the siege as the defense forces protecting that region. If the forces from Afrin move toward Kobane and the forces from Kobane move toward Afrin this does not mean that some other force has entered that area, because that land belongs to them.

But if even if we live aside for a moment that Afrin and Kobane are part of Kurdistan we can say that they are within the borders of Syria. Afrin is a city in Syria. Kobane is a city in Syria, Aleppo is a city in Syria. If all of these are Syrian cities then we have a right to defend and protect our people in these cities and we have the right to lift the siege under which they are living. However those cities are a part of Kurdistan and a part of Syria and we will not responsibility for them. Of course the Kurdish people will be sensitive on this issue and they will protect their people. More importantly, if Afrin is a center of the democratic system then the for this federal system to be formed and develop then its encirclement must be ended and the siege of Afrin must be lifted, and a road must be opened between Afrin and the other areas.