The Meaning of Turkey’s Strikes on Rojava and Sinjar 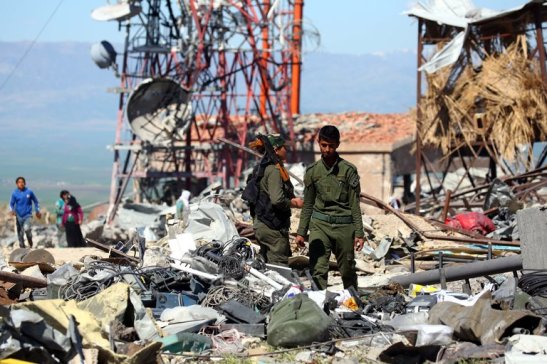 The following is a translation of an article written by Turkish journalist Fehim Taştekin for Gazete Duvar. In the article Taştekin analyses Turkey’s recent attacks on the YPG in Syria and Iraq from the perspective of Turkey’s domestic politics and the AKP’s policies towards the PKK and the YPG.

Turkey has finally struck against those ‘enemy’ elements in Sinjar and Rojava whom it has been threatening for so long. And of course when someone or something becomes labelled an ‘enemy’ everything else becomes just unimportant details submerged under a wave of nationalist fervor.

Anything which is filmed from an aerial drone at a few thousand feet or bombed by an F-16 is simply a ‘target’. Target, attack and destroy; this is what the military is all about. The military does not put much interest in the social, political, historical or geographical connections of such targets. However when politics becomes defined within military parameters we are at once beset by either a terrifying ignorance or a great deception.

Whatever our ideology we first need to see the realities on the ground. Only then can everyone stake out their position according to their own disposition or point of view.

The Kurdish movement as constructed around the PKK — which the AKP leadership had been openly saying was ‘finished’ — has by the coercive concentration of power domestically and by the incalculable contribution of policies of foreign interventions internationally has recently gained a shocking dimension of political and geographic depth. For years we woke up to news, designed to strengthen the state’s security policies, about how the PKK was bombed in some cross-border operation in the Kandil, Hakur, Zap, Avashin, Metina, Haftanin and Gare mountains where the organization continued eke out an existence.  “They were destroyed in their caves” was always the headline. In fact after the strike on the 25th of April against both the Yezidi inhabited region of Sinjar and Karacok in the northern Syria similar headlines also appeared.

However the reality was something quite different from the headlines. The Kurdish movement, recognizing Öcalan as its leader, has together with its allies come to control nearly a third of Syria. This movement also has a multidimensional influence in Iraq in a region which runs from Sinjar to Kirkuk. Let me get to the point: Insomuch that a peaceful solution to the Kurdish question has been deferred domestically, groups organized by the PKK have gained a greater amount of maneuverability on the regional and international playing fields. And as a result the Syrian Kurds have suddenly become partners with the United States, Turkey’s most important ally in NATO. And in all of this the AKP leadership’s blatant ignorance, together with its adventurist and incompetent policies are in large part to blame.

After a certain point they turned the various groups which they had collected to overthrow the Syrian government against Rojava in an attempt to reverse Kurdish advances. When the YPG organized a defensive line against groups such as ISIS, the Nusra Front, and Ahrar al-Sham they received support not only from Kurds but from other peoples of the region. The battle with ISIS between 2014 and today has generated a legitimacy for actors in Rojava that have transcended its own borders. IIshow Gowriye, the president of the Syriac Union Party  — one of the actors in Rojava’s project of autonomy – made a very simple point to me:

“When the rest of Syria was turned into a living hell the YPG and the Asayish provided security and stability here. All the people who live here know their value…our peoples see [intervention by Turkey and its proxies] as an occupation of our lands, an infringement on our rights, and as a colonialist movement.”

(Of course we must bracket the effects created by the US intervention in the fight against ISIS and the question of exactly where this will lead the Kurds.)

With policies that have targeted the gains of the Kurds and benefited groups such as ISIS for the past 5 years, Turkey has been unable to oppose the growing partnership between Kurds and Arabs (and even Turkmen), just as it has been unable to sideline the YPG. So you want to argue that the Euphrates Shield operation prevented the formation of a ‘Kurdish corridor’? Isn’t this a success? Yes, with the withdrawal of ISIS, various groups supported by the Turkish Armed Forces positioned themselves along the El Bab-Jarabulus Line and the much exaggerated and misleading notion of a ‘Kurdish corridor’ was prevented. However putting those places primarily populated by Kurds aside there was no change in the status of regions such as Manvic and Tel Refat which the Kurds hold together with their local allies. However, each of these were supposed to be turned over the Free Syrian Army. In the end Turkey was compelled to say that the “Euphrates Shield Operation was successfully completed.” Yet the game is certainly not over. For example, attacks on Efrin, which is territorialy disconnected from the other cantons, is increasing. Once more, the Turkish Armed forces is drawing up plans to attack through Til Abyad and Serekaniye (Ras al Ayn), thereby breaking the connection between the Kobane and Cizire Cantons.

Right before the strikes on Sinjar and Karachok there was a scenario making the rounds of the pro-government media. According to this scenario, the Turkish Army would enter into Til Abyad, clear the area of YPG forces and hand it over to elements of the FSA and then formerly ‘displaced persons’ would be allowed to resettle in the city. I am not sure who is drawing up such scenarios but they contain a great deal of factual misinformation and serious efforts at manipulation. After ISIS was pushed out a common government was formed in Til Abyad between Arabs, Kurds and Turkmen. Those who left their homes during the fighting have already returned. And if some haven’t returned, even if it just a few, be careful and look closely and see if the reason wasn’t there connections to ISIS!

Moreover, it is not as if Til Abyad is a place where Arabs will simply celebrate a Turkish intervention. Traditionally Arabs here are very supportive of the Syrian regime. The strategy of mutual defense and common partnership being attempted in Rojava has also made their alliance with Kurds easier. As long as there is no deviation from this policy their partnership with the Kurds will continue.

Forget the news which reports that scores of tribal representatives have gathered in Urfa and have formed an alternative force under the name of the “Euphrates-Cezire Liberation Army.” The creation of such armies under the direction of Turkey has been announced many times in the past, but no one has seen thousands of soldiers advancing on the Euphrates! On the other hand many tribes in an area from Haseke to Shedadi and Raqqa which Turkey together with its Gulf partners attempted to organize against the Syrian regime have given fighters to the Syrian Democratic Forces. It is difficult to see that this mobilization can be reversed and that the Kurds can be excluded given existing evidence.

Given that neither direct intervention nor intervention through proxies has had any result then the political will in Ankara should also reflect this. Well then why this insistence? What is desired by such operations?

First this must be underlined: When it comes to the question of the Kurds gaining some kind of official recognition the state, the government and (an important part) of the Turkish opposition are on the same page in terms of their ‘separatism syndrome.’ This level of sentiment makes possible the unquestionable perpetuation of oppression toward the Kurds. From this perspective one must view the operations against Rojava as a continuation of Turkey’s general Kurdish policy.

When it comes to the agenda of current events Turkey considered the partnership which the United States has formed with the Kurds as a great dilemma. With its Euphrates Shield Operation the government had hoped to drop the Kurds from the equation and to press on to Raqqa together with the United States but it didn’t happen. Most likely the main goal of these attacks against Rojava is to destroy this partnership. Seeing the fact that Donald Trump’s Syrian policy is not entirely yet formed as an opportunity, they are presenting the United States with a choice between either Turkey or the PKK. The United States has fended off this pressure with the formula that the Syrian Democratic Forces and the YPG needed to be considered as separate from the PKK.

However if the attacks continue, the YPG may be forced to pull its forces positioned on the edge of Raqqa to the north. Or the Kurds could even pull out of the Raqqa operation entirely believing that their partnership with the United States will not protect them. This is the result that Turkey wants. According to my sources in the YPG the Kurds are supportive of sticking with the Raqqa operation as long as the situation in the north does not become too dire.

According to this calculation, if the Raqqa operation is weakened the United States might reconsider its partnership with the Kurds and accept the alternative presented by Turkey. Thus it is not a coincidence that President Tayyip Erdoğan undertook this offensive before his visit to Washington. The refrain that “this is only the beginning” shows all the signs that this is a show of determination and an attempt to influence Trump. As I have emphasized time and time again before in my reporting, the United States does not have too many choices in Syria. Any sacrifice of the Kurds would depend on a serious alternative. For this reason Trump, with his businessman mentality, is forced to hitch the same carriage to both Turkey and the forces of Rojava.

Outside of the US factor, local elements are also important if Turkey’s intervention is to have any result. In the first place, in Rojava we are not simply talking about an organization but a broad autonomous structure with military, social, political cultural and economic elements. The strength which such a structure develops rests on different dimensions. Secondly, it is not only Kurds who are actors in this structure. Consequently, any enmity created concerns different social segments and factions. Thirdly, unlike Turkey, the Syrian regime does not look upon the YPG as a terrorist organization. The priority of Damascus is not war but negotiation. Many different groups in Syria and Iraq consider Turkey’s interventions as attempts to give ISIS some breathing room. That Ankara says the opposite does not erase its 6 year record of support for jihadists. In fact, Turkey’s bombing of Sinjar following the 2014 tragedy which once against exposed the Yezidis to genocide, no matter who the target was, puts Turkey in the same category as ISIS for the people of the region.

These realities show that leaving aside whatever results a military intervention might achieve it will only serve to produce a whole new dimension of enemies.

This entry was posted on April 27, 2017 by --- in Afrin, Islamic State of Iraq and Sham (ISIS), PKK, Rojava, Sinjar, Uncategorized, Yezidis, Şengal.