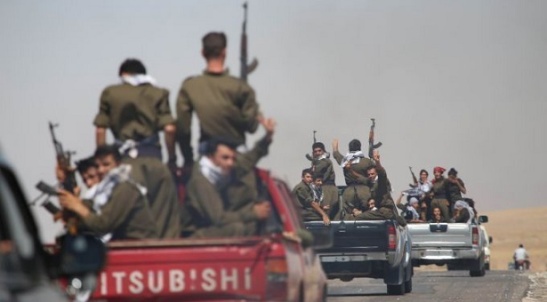 (ANF) The YPG’s operation west of Serêkaniyê has entered its fourth day, with fierce clashes continuing around Mebruka and Dehme. The YPG is attempting to advance west out of the Cizîrê Canton toward the ISIS stronghold of Girê Spî (Til Ebyad) in an attempt to break the ISIS siege of Kobanê.

ISIS forces have brought up reinforcements – including heavy weapons and tanks – from their bases in Girê Spî in an attempt to halt the YPG advance. According to a statement from the YPG scores of ISIS fighters have been killed in the fighting over the last 24 hours.

This entry was posted on September 24, 2014 by --- in Uncategorized and tagged Cizîrê, Daish, ISIS, Islamic State, Kobanê, Rojava, Serêkaniyê, YPG.