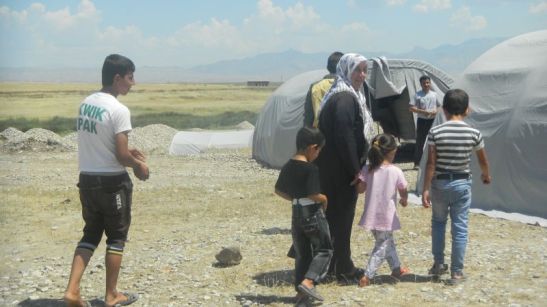 (ANF/DERİK) Refugees have begun to arrive at the first refugee camp established in Rojava, in the village of Hekmiye near the city of Derik (Arabic: al Malikiyah) in the east of the Cizîre Canton. Dijaw Ehmed, Social Works Minister of the Cizîre Canton, reported that 50 tents have already been set up for arriving refugees, but that work continued  and plans had been made for a 600-tent camp. Ehmed said refugees forced to migrate because of war, difficult living conditions and other such reasons would be eligible for residency in the camp.

The camp first opened to refugees on May 13th and is protected by the Rojava public security forces (Asayiş). Most camp residents are from cities such as Aleppo, Damascus and Kobanê, and there are both Arabs and Kurds among them. Minister Ehmed said the the Kurdish Red Crescent (Heyva Sor a Kurdistan) had donated 300 tents to the project.

Ehmed explained that he goal of the camp is to provide suitable housing for the migrants, to ensure that their daily needs are met, and to tackle social health problems. Ehmed recalled that before the camp the refugees had been living in villages, mosques, and school buildings and that the establishment of the camp had been taken “with the idea of solving an emergency situation.”

The minister added that the camp had been set up with all the means at their disposal, and work was underway to ensure that all food, drink, electrical, and water requirements would be fully met in the camp. Currently an electrical system had been set up using generators and electricity was available in every tent. He also promised that work would continue in order that these needs continued to be met.

Ehmed spoke of the current condition of the camp, saying that although the Kurdish Red Crescent (Heyva Sor a Kurdistan) had donated 300 tents only 50 had been so far set up to accommodate the refugees that have so far settled in the camp. “We are working to widen the space around the camp and will continue to set up the remaining 250 tents according to the number of refugees who arrive” he said, noting also that the Rojava Humanitarian Aid Organization was providing food, formula, linen, milk and other baby supplies as well as fruit.

Ehmed also spoke of the quality of the tens, saying they were waterproof and made up of three layers which protects it from the heat. He also added that there were toilets, bathing facilities, and kitchens in the camp.

Ehmed said work was ongoing to ensure that food would be provided to camp residents at every meal, but that international support would help in such efforts, saying “right now outside of the Kurdish Red Crescent there has been no help from foreign aid organizations. That is there was a visit, and they came and saw the camp but no aid was given. We have also requested that they support us in this.”

According to Ehmed the camp will ultimately have a capacity for 3000 tents, and drew attention to the fact that: “People can come to the camp who have lost their homes in the war, who have lost their source of living, and at the same time those who are exposed to fighting in the various cities of the Cizîre Canton can also come. Also those who for various reasons have been forced to migrate outside of Syria can settle in these camps if they wish to return to their country.”

4 comments on “First Refugee Camp Set Up In Rojava”