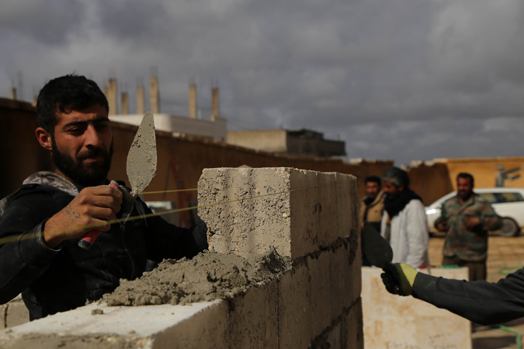 The following article “Yeni yaşamın ilk harcı karıldı” was written by Kadri Özkan and Rojda Korkmaz for DIHA and carried in Özgür Gündem. The first part has been translated into English below.

The number of families returning to Kobanê is increasing as the front has shifted kilometers away from the city center. However the scars of the battle can be seen all through the city. On the eastern side of the city where most of the buildings were destroyed in the fighting roads are being opened to allow for the passage of vehicles, while in the western part of Kobanê where civilians remain they are cleaning their homes and putting their lives back into order.

As the Reconstruction Committee works to ascertain the total damage, those buildings which remain structurally sound are being turned into centers for work to coordinate the resistance and life around the city. The Cela library has been converted into a public security (asayiş) center. In the garden of the library a wall is going up in order to build a kitchen. The wall is one of the first projects in the reconstruction of Kobanê.  Mislim Çelo, one of the asayiş officials, speaks of the damage the city suffered during the battle, saying “following the great victory we have rolled up sleeves to get started on the things that desperately need to be accomplished here. The reconstruction of the city is on our agenda and work is going on in every part of the city. A decision was taken to make the Cela library into the headquarters for the asayiş. Çelo says that the wall going up in the garden is the first wall going up as part of the reconstruction of Kobanê, saying “the bricks being laid and the mortar being mixed for this wall are the first as part of the reconstruction of Kobanê and they smell like freedom. We will continue in our efforts until the last brick is laid in the city’s reconstruction.”  Muhammed Omer Silêman, one of the workers helping to put up the wall, says “Kobanê is our home and we will work all together to rebuild our home.”

A Corridor Must Be Opened To Rebuild Kobanê 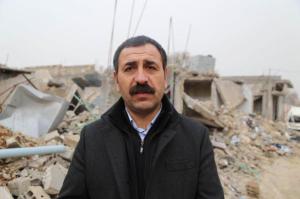 Work to assess the damage in the city continues through various delegations which have arrived in Kobanê since the liberation of the city from the ‘DAISH’ gangs. Turan Kapan, the president of the Amed (Diyarbakir) branch of the Society of Civil Engineers and the Secretary for the Amed Provincial Coordinating Body of the Union of Societies of Engineers and Architects (TMMOB), has come as part of a delegation of engineers, architects and urban planners investigating conditions in  Kobanê. Speaking about the delegation’s findings concerning the present conditions in the city, Kapan said “the conditions we now see in Kobanê are the conditions we saw in Van and in the Marmara regions following the earthquakes. The only difference is that in those places the damage occurred as a result of natural causes and here it was artificial.” Kapan then stressed that a corridor must be opened to Kobanê to allow for urgent aid to assist in the reconstruction.

This entry was posted on February 15, 2015 by --- in Uncategorized and tagged Amed, Diyarbakır, Kobanê, Rojava, TEV-DEM, TMMOB, Turan Kapan.