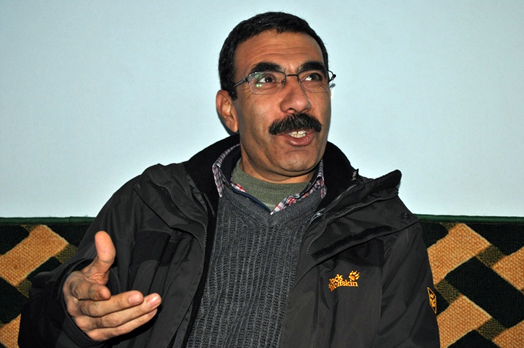 In the following interview TEV-DEM Aldar Xelil speaks with journalist M. Ali Çelebi about the Duhok Agreement reached between TEV-DEM and ENKS last week, the substance of that agreement and its meaning for the revolution going forward. They also discuss relations between the KDP and the Rojava Autonomous Administration, Turkey’s role in Syria, and the situation in the region more generally. It originally appeared in Özgür Gündem and has been translated into English below.

-How many articles does the Duhok agreement consist of? What are these articles?

There are three articles. The 1st article concerns the formation of an assembly. A place for politics for Rojava Kurds and an official Kurdish body. The parties from both TEV-DEM and from ENKS will take part together along with other parties. Within the assembly TEV-DEM will have 40% of the seats, ENKS will have 40% and the other parties will have 20%. There will be a total of 30 seats. The strategic and political positions of the Kurds will be discussed and if needed necessary decisions will be taken. This official body will forward certain views to the autonomous administration. If they have particular proposals or projects they can send them using their own Kurdish candidates in something like a Kurdish block.

This government will be something like a consultative assembly. This official body is only for the Kurds. As you know within the autonomous administration there are Arabs, Assyrians, Chaldeans. This only applies to the Kurds.

-How many places will each group have in this assembly?

-Is it clear what other parties there will be?

No the other parties remain unclear. The existing parties will meet. Whatever parties apply will be included. If there are many different parties then there will be an election. The 24 people will vote and choose the remaining 6. The parties which gain the most votes will join the assembly.

-What are the other articles?

The 2nd article covers relations with the administration of Democratic Autonomy. As you know ENKS had opposed the system of the administration of Democratic Autonomy. In this agreement they accepted the administration. It has become a common project. They have accepted themselves as a part of this project. However they said that “we have some proposals.” As for us we let them know that we will debate these proposals. A committee will be formed within the official body [to debate] these proposals. If their proposals are accepted and there are certain subjects which will be changed then all of this will be debated. Of course in addition to this they will also participate in the administration. They will take part in the legislative and executive assemblies, and can take part in other bodies. However this is all until the elections. After the elections this agreement is no longer binding, because the elections are the main foundation.

-There were certain proposals regarding the Social Contract…

They are not proposing anything concretely. We said that we had our own proposals. However these proposals will become clearer with coordination. They said “We have certain views and opinions regarding the Social Contract.” No detailed proposals were forthcoming. We said “a committee will be formed within the official body and these will be debated.” We said that “the Social Contract and other aspects of the system can be debated. We are open to change.”

The 3rd Article relates to defense. They said “we are also citizens of this country. We want to do something for the defense of this country.” And we told them that defense was everyone’s duty. We said “take part in the defense. You will discuss how you will take part and the different processes within the established bodies.” And this body is the YPG and YPJ. A committee will be formed within the YPG and YPJ high command. They will go and discuss this with the YPG and YPJ. It’s they who will figure out how to come to an agreement.

-Were changes to the YPG and YPJ system of defense up for discussion?

No proposals were made about this subject. They did not have the courage. If this proposal had come up we would have walked out of the meeting.

-During the course of the meetings in Duhok, White House Deputy National Security Adviser Antony Blinken and Deputy Assistant Secretary of State Brett McGurk were in the KRG. Who did they meet with?

They met with Barzani. However Turkish officials were also present at this meeting. There were people from the US, Great Britain, Turkey and the KDP.

-Did the meetings between PYD co-President Salih Muslim and American diplomats in Paris have any effect on the Duhok agreement?

Not any direct effects, however everything is affecting everything else. There is an environment, a foundation for discussion. Up until now ENKS was not a popular force. They had no organizations, they had no YPG. They only had one thing. They were saying “we have relations with certain powers and certain states. You have none. We are in a strong position.” Now we are in these meetings as well. At the same time there have been meetings with America. Of course there have been some psychological effects. If we wanted we could have said “look we are not beholden to you. We have relations that go outside of you.” However we didn’t say this.

-ENKS, which is backed by the KDP, has been categorically against the Rojava Revolution. How did such a foundation emerge? At one point even there was discussion that one party within ENKS might create a civil war within Rojava.

After Şengal (Sinjar) the situation of the KDP got bad. They lost a lot of prestige. They were weakened.  However ISIS attacked them too and they saw the threat. In fact most of the resistance in the South is formed from our people. Our people are fighting and resisting there. For that reason they are dependent on us. We came at their request. They wanted to say to the world “look I still have influence.” However ISIS is a dangerous force and is hitting them. They saw the autonomous administration and the existing resistance. In the beginning they waited saying “maybe they won’t succeed and Kobanê will fall.” However that didn’t happen. Our autonomous administration is moving forward.

-What kind of road will be followed after the elections? Is there anything in the Duhok Agreement about this or an election calendar?

No. There is not certain calendar for the elections. A meeting will be held in Qamişlo. The details will be discussed. The general elections might not be until 2015.

-As President Erdoğan was flying to Latvia he said that no civilians remained in Kobanê, that it had not fallen as he had said earlier, and then he criticized the United States for opening up an air corridor and bringing weapons. At a press conference in Latvia on October 23, referring to the American aid, he said “Did Turkey look positively at this? No it did not. America did this despite Turkey and I also told them. I said ‘right now Kobanê is not a strategic place for you. At most it is a strategic place for us and it is to us that sensitivity needs to be shown.’” On the other hand a change in policy is expected from Turkey. How do you evaluate this?

Erdoğan really wanted Kobanê to fall. He wanted it to fall more than ISIS. However it did not go as he expected. Until now he has been using delay tactics. He wanted it to fall., perhaps tonight, perhaps tomorrow or the other day. This resistance convinced everyone that it would not fall. That is why Erdoğan lost. Erdoğan says that it’s “not strategic.” It is strategic. In fact [on the radio] the YPG heard ISIS say this: “If we win this battle we will win the whole of Syria. If we lose we will lose everything.” They look at it as being that strategic. Let me give you some information. These days ISIS has stopped fighting against everyone over the whole of Syria. They have sent all their forces to Kobanê. That is to say they are insistent. They are saying “we will take Kobanê.” And for this they have stopped there fighting every else. Kobanê is our city. Whatever happens we will not abandon it. For us this is a principal. If we abandon it that means surrender. For us this city is strategic and meaningful. The 19th of July Revolution began in Kobanê. Kobanê is a symbol for us. More than that we want to break ISIS. Their attacks need to be stopped wherever they occur.

-The first martyr of the Kurdish movement in Rojava was Dicle. Years later youths are coming from different parts of Kurdistan, from the resistance in Gezi and from Europe for the Kobanê resistance. An international unity is also forming…

Kobanê became Stalingrad. In the same way that Stalingrad changed the balance of the Second World War. A democratic front formed there. The Nazi forces were broken. The Battle of Stalingrad changed the balance entirely and Kobanê is now playing that role.  For that reason it is strategic. For that reason it has become a battle of honor for Kurdistan and for others. Not only for Kurds. In particular 1,500 fighters have come from Bakur [North Kurdistan]. We are fighting against this terror for the world and all its peoples. Everyone should help us in the war we are waging. We are the most successful force defending against terrorism, that is to say the Kurds. We will be successful. And Kobanê has in fact been successful. Following the Kobanê resistance ISIS has started to head toward the cliff.

-The Kurds were not accepted at the First and Second Geneva Conferences. Kobanê has become the crown of the Rojava revolution. How will the subsequent conferences be after Kobanê?