President Of Kobanê Canton: In Order For Support, Dialog Must Be Established 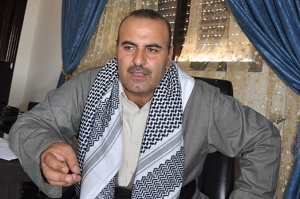 Reporters Abdurrahman Gök and Ersin Çaksu have spoken with the President of the Kobanê Canton Enver Muslim about the recent delivery of weapons from coalition forces, the question of an aid corridor, claims that the peshmerga forces were in Kobanê, and the situation in the city more generally. The article appeared in Özgür Gündem and has been translated into English below.

The President of the Kobanê Canton Enver Muslim told the reporters that right now there was no question of of peshmerga forces coming to Kobanê and that no one had contacted either the YPG or the canton government about the subject. Muslim went on to say that “since our main goal is destroying ISIS then there needs to be a relationship. We are ready to build this relationship and would be glad to do so. The help that has been provided also makes us very pleased.”

Muslim also emphasized that threat to the city continues to be great and said that while they would be open to any aid “any power which wants to offer aid to Kobanê or the YPG would need to establish relations with us and the YPG.”

Delivery Of Weapons Needs To Continue

On the question of the weapons which had been delivered by coalition forces, Muslim said “the attacks against Kobanê have been going on for more than one month. Following the heavy attacks against Kobanê and the subsequent increase in events held in support of Kobanê around the world many different groups have begun to support Kobanê. However that support by itself is not enough. The coalition forces in which the United States, Great Britain, France, Canada and many other states are taking part launched airstrikes against those places where the gangs had their heavy weapons and they were effective. However there were not enough because YPG is fighting ISIS on the ground and it needs support. In fact yesterday support came from South Kurdistan. These support reached the YPG through US planes. This is something for which we need to say thanks. It was something that made us and the civilians in the city very happy. In the aid that arrived there were weapons, medicine and food stuffs. However this by itself is not enough and needs to continue. It will take a little time to push ISIS out of Kobanê. And in order to liberate the villages of Kobanê in the next phase the delivery of weapons needs to continue.”

Muslim said that claims that peshmerga forces had arrived to Kobanê were false, saying “right now the force fighting ISIS in Kobanê is the YPG and YPJ and some democratic elements within the Free Syrian Army (FSA). Other than that there is no other force fighting here. However we want to reiterate that if there is a force that would like to support Kobanê and the YPG they need to establish relations with us and the YPG. We can get results without establishing relations. In the same way that those who sent us weapons and the coalition forces were able to get these weapons to Kobanê in partnership with us, forces which want to support Kobanê and the YPG must work in the same coordinated fashion. However until now there are no such established relations. However if there are those who want to then we are open to this and it would make us happy. But until now there is no group here other than the YPG, YPJK and some groups from the FSA. Forces that want to come can get results by establishing relations with the canton government and the YPG. We are open to such support and would be very pleased.

“We Are Open To Support”

“What we want to say” Muslim continued, “is that the threat to Kobanê continues. The threat of a massacre by ISIS against civilians continues. Because for two months ISIS has claimed to be taking Kobanê but cannot take it. For that reason there is a risk of massacre and Kobanê needs to be supported in response. We are open to weapons support and to groups which want to fight together with us against ISIS.”

Muslim also said that Turkish policy towards Kobanê and Rojava had not changed and reminded Turkey that ISIS also posed a threat to them, saying “even after the delivery of weapons we have had no dialog with Turkey. But we are hoping that Turkey is coming to consider ISIS as an enemy of the people. In the same way that today it threatens the Kobanê Canton tomorrow it can threaten Turkey and the peoples of Turkey. It will take the destruction it has wreaked in the places it has occupied to Turkey as well. For this reason Turkey too needs to support the struggle against ISIS. Turkey, Iraq and everyone needs to support [efforts] to remove the threat posed by ISIS in the Middle East.

The Threat Against Kobanê Is Great

Muslim also denied the reports carried by certain media outlets that ISIS had pulled back from Kobanê, saying “the threat against Kobanê is great. ISIS has entered Kobanê with a very large force and heavy weapons. Until now it has fired thousands of mortars as the city. News reports suggesting that ISIS has pulled back from Kobanê do not reflect reality. The threat against Kobanê is still very great. Kobanê remains subjected to daily mortar attacks. There is not a single part of Kobanê that has not been struck by mortars. At the same time dozens of car and truck bombs have been detonated in Kobanê. There are thousands of fighters here in attack mode. The threat continues. However with the support of the coalition and those forces which defend humanity we will push ISIS out of Kobanê within a short period and later out of all the villages of Kobanê.”

ISIS Wants To Carry Out A Massacre

Muslim also emphasized that YPG and YPJ forces had expanded much effort and sacrifice in order to protect civilians, saying “the morale of the YPG and YPJ is very high. Because the YPG and YPJ believe that they are protecting Kobanê and its civilians and will push ISIS out of Kobanê. The YPG have faith in a democratic Syria. For that reason they mobilized for defense with all of their resources. Right now the YPG is showing the most resistance in order to protect civilians. There are thousands of civilians in Kobanê. They are under threat and the YPG is protecting them. Actually ISIS wants very much to enter the city and carry out a massacre. That they are sending these truck bombs shows that they want to carry out a massacre. They want to take out their rage at having been defeated and their plans having been spoiled with a massacre. The attacks are continuing constantly. However they cannot get through the defensive line set up by the YPG and YPJ.”

In conclusion Muslim called on everyone to support Kobanê and show their support for a democratic Syria, saying “finally our patriotic people and the forces of Kurdistan must continue their democratic protests so that we get Kobanê out of this difficult situation. All forces need to support us for a democratic Syria in which Assyrians, Kurds, Turkmens, Arabs, Armenians and different peoples can live together.”