The KDP Government Must Also Recognize The Rojava Cantons 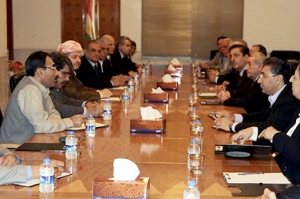 The following article “Kantonları hükümet de tanıma” was written by M. Ali Çelebi for Özgür Gündem. It has been translated into English below.

One year after he was banned by the KDP government PYD Co-President Salih Muslim is once again in the KRG.

The meetings which began in Duhok between the different parties from Rojava and the KDP and YNK continue. Kurds are meeting to establish a foundation for national unity in response to barbaric organizations like ISIS.

Following the collapse of the Hewler Agreement and the subsequent failure to form committees aimed at working out national, foreign relations, security and social issues, a delegation headed by PYD Co-President Muslim – who was last within the borders of the KRG in October 2013 and is back following the reversal of his ban by the KPD government – continues to attend meetings in Hewler (Erbil) and Duhok. Constituents of the PYD and TEV-DEM, as well as a delegation headed by KDP leader Mesud Barzani, representatives of the YNK, and representatives of the National Congress of Syrian Kurds (ENKS) are attending the meetings. During the meetings the Kurdish parliament [of the KRG] adopted a resolution which included the recognition of the Rojava Cantons and the provision of support [to the cantons]. Following the resistance in Kobanê there is an expectation that this strategic opening will be clinched by [the emergence of] national unity and a common will.

PYD Representative in Hewler Xerib Hiso pointed to the importance of the decision taken by the [KRG’s] parliament as he assessed the meetings and the decision for our newspaper. Hiso said “there was a two day session. In these sessions we met around the subjects of the cantons, autonomous government, and the subject of support. 79 people said yes. These were positive steps. But it should not stop here. If you want to offer support then you would recognize [the canton governments]. If you recognize them then you must offer support. We want more and for them to be clearer. The [KDP] government should also recognize us. If parliament has taken this positive decision then they too should join them in this positive decision.

Xerib Hiso also said that the ENKS representatives had caused problems which stemmed from their old attitude [to the cantons], saying “ENKS, TEV-DEM, and the parties which have taken part in the system of democratic autonomy all have delegations here. Some problems and issues have emerged in particular around the old attitude of the ENKS representatives. Because this attitude is the mentality of 1 or 2 years ago. They need to approach [the cantons] with a view to the two and half year process through which Rojava has gone through. The ENKS party bosses also wanted to divide up and share Rojava Kurdistan 50/50 just like two years ago. Just like at Hewler 1 they are not getting in line at Hewler 2. The Rojava resistance has affected the whole of Kurdistan, the region and the international arena. The YPG/YPJ resistance and struggle has established roots in the land. Within the social arena the system of autonomy and the formation of the cantons have developed with this struggle. These are Kurdistan’s gains. They are once again approaching with the old mentlaity. They are saying 50/50. This approach is not ethical. We do not accept their narrow approach. They are saying let it only be ENKS and TEV-DEM on the ground. Ok, well then one needs to ask: there are some parties and they do take part in TEV-DEM. Nor do they take part in ENKS. Where will those in people in charge of these parties participate? Where will these parties go? We as the delegations from the Rojava put forward a suggestion. Let there be a system in which all parties can participate.”

Meeting Between Muslim and Barzani

Hiso noted that in the meeting between Muslim and Barzani many issues were discussed – including the general situation in Kurdistan, the widening resistance, the resistance in Kobanê in particular, the pressure ISIS has put on Kurdistan, and the subjects of unification and an alliance as a foundational need. Hiso added that the weapons which had been sent by the Hewler government had not been allowed to reach Kobanê by the AKP government. Hiso explained that the weapons brought to the border “stayed there for a couple of hours and then came back. In rhetoric Turkey is a friend of the government in the South and needed to be of help but the Turkish government did not accept them and the weapons were returned to the South.”

The Duhok Meetings Must Not Come To Nothing

PYD Hewler Representative Hiso stressed that all eyes are on the current meetings, saying “the eyes of the entire Kurdish public are on the meetings taking place in Duhok. Everyone is expecting us to move forward in unity and as allies. We must not go back to Rojava with empty hands. We came here for unity. We came here for an alliance. We came with the spirit of the Kobanê struggle and we are insistent on obtaining certain outcomes. We want that all the parties and organizations in Rojava take part in a body of between 27-31 people. 7-9 people will coordinate the work and will be chosen from within the 31. This coordinating body will oversee political work. The government will oversee work around elections.”