Aid Continues To Flow To Kobanê 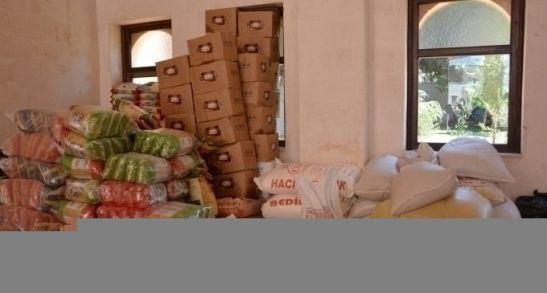 (ANF) A total of 126 truckloads of food have arrived in Kobanê as part of the food drive that began after the most recent offensive against the canton launched by the Islamic State of Iraq and Sham (ISIS).  The Office of the Turkish Prime Minister also handed over 3 truckloads containing 7 thousand packets of food to officials in Kobanê through its representatives in the office of Disaster and Emergency Management (AFAD).

Following the most recent wave of ISIS attacks on the canton beginning on July 2nd and the call for mobilization, the population of North Kurdistan has set up protest camps along the border and organized food drives that continue to form a lifeline for Kobanê.

According to Faruk Tatlı, who works for the Suruç Municipality and is a member of the Rojava Aid Commission, 126 truckloads of food have passed through the Mürşitpinar Border Gate (Kobanê Serxet) to officials in Kobanê. Currently the warehouse in Suruş is filled to capacity with more goods and Tatlı said that goods coming from other provinces were currently waiting there, saying “permission was given for 5 ambulances, printing equipment and an oven. Over the next week we will also deliver these. Kurds and their friends have become more aware. Aid should continue in this fashion.”

Tatlı also noted that the Office of the Prime Minister distributed food aid in the Kobanê Canton for the first time. Tatlı confirmed that it delivered 3 truckloads containing 7 thousand packets of food through its representatives in AFAD together with its own observers, saying “Canton officials expressed their pleasure with the aid. They said they had relatives living in Turkey. We also expect the aid to continue.”