On The Front In Kobanê

What follows is translation of the article “Kuzey Cepheye” (“To The Northern Front”) by Ersin Çaksu and İsmail Eskin from Özgür Gündem and DİHA.

While the attacks of the Islamic State of Iraq and Sham (ISIS) directed by the AKP against Kobanê continue, a special meeting of the Democratic Regions Party (DBP) has made a call for “all of our people to march to Kobanê.” The people, heading toward Pirsûs, have begun the first leg of the march.

YPJ commanders Rustem and Narin spoke with our reporter Ersin Çaksu in Kobanê. The commanders called the youth to the front, saying “the ISIS which attempting to overthrow Kobanê and those who have sent them to carry out their bidding will come out the worst for it.”

We Will Not Recognize The Borders

The DBP, holding an extraordinary meeting to address the attacks launched by the AKP through ISIS with the goal of destroying the Rojava Revolution, announced that “we will go with all of our forces to Kobanê. We have never considered the borders between Rojava and North Kurdistan legitimate nor will we ever.”

Nemir Amca, 67 years of age, attracts our attention among the YPG fighters. Nemir means ‘immortal’ in Kurdish and Nemir Amca has been in the ranks of the YPG since the beginning of the revolution. He tells us that “I will not die until we have guaranteed the security of the revolution.” 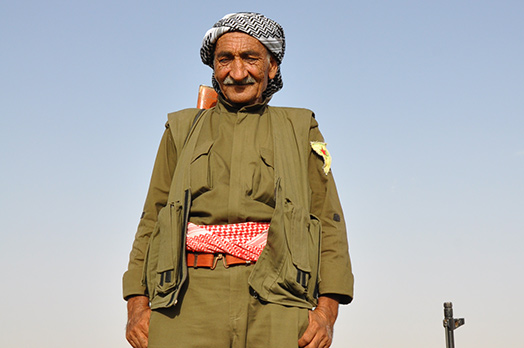 We head straight to Kobanê the day after ISIS gangs in the Rojava Canton of Kobanê began an assault against the YPG along the border with Northern Kurdistan in an attempt to destroy Kobanê and were pushed back by the heroic resistance of YPG/YPJ fighters. The first place we stop with DİHA reporter İsmail Eskin is Kaşê Çarixlî Hill where the previous morning four YPG/YPJ fighters broke an advance of more than 50 ISIS members.

After a warm greeting from the YPG fighters right on top of the hill we ask questions to the warriors of this heroic resistance which we witnessed together with hundreds of others. When we ask about the moments when the ISIS gangs advanced with tens of tanks and heavy weapons one of the young YPJ commanders Viyan Rustem responds by saying that they were giving to them by international powers with the plan to destroy Kobanê and that “those who sent them to do their bidding will also come out the worst for it.”

When Will The Borders Come Down?

Following our conversation with the YPG fighters in the 45 C heat, the vehicle that the YPG called to take us to Kobanê arrives and, saying goodbye to the fighters, we go on our way. After stopping in the villages of Çarixlî, Aşme and Çeloxlu, which the ISIS had attacked in succession the day before, we turn to the West and head straight toward Kobanê. After passing a little beyond the village of Qiran we stop in the village of Dikmetaş and meet with Narin, a YPJ commander. Narin, when she learns we have come from the North, immediately asks us “when will those fences come down?” Without waiting for a response she answers herself. “They will come down, they will come down…”

After passing through scores of a little villages such as Xûrxûrê, Bûban, Bûbana Biçûk, Sifdeka Biçûk, Sifdeka Mezin, Sûsan and Xerabeşk we reached Kobanê. Kajîn, the driver of the vehicle which has brought us to Kobanê, is explaining the particularities of the city. Kajîn stresses that the people of Kobanê are “a stubborn people,” saying that “just as the people of Kobanê will never compromise their freedoms they will never compromise around their economic freedoms. For example most come at night to stand guard with the YPG, and then work during the day to support their families.” As Kajîn shows us the work of the municipality on the streets of Kobanê, he tells us that “we are both fighting and building.”

The People On The Front

We are heading to the Defense Ministry. We see lots of people in front of the training building next door. These are people who have heeded the YPG’s call for mobilization and are going to the front at regular intervals. In the Ministry we speak with the Kobanê Canton’s Self-Defense Minister İsmet Hesen. We ask about the attacks on the region and we received these answer from Hesen: “They are attacking from Şerqî (to the east) Xerbî (to the west) and Qible (to the south). For example two days ago they attacked Girê Sor from Şerqî. Yesterday as you witnessed they attacked from Xerbî.” Hesen tells us that the goal of the first stage is to capture the surrounding villages and then to attack and capture the Kobanê city center. He drew attention to the fact that the goal of the attack the previous day on the villages along the border with North Kurdistan was to divide the people of the region from Northern Kurdistan.

The Gangs Will Not Enter Kobanê

YPG/YPJ forces explaining the Kobanê resistance stress that the ISIS gangs will not be successful. YGP Brigade Commander Dilsoz Cudi, who tells us they have formed a line of resistance against the attacks, says that the previous evening that they had subjected ISIS fighters coming from Cerablus to heavy fire and that they were forced to withdraw. Cudi explains that the goal of the attacks on military bases on Kâşhe Aşme (Aşme Hill) between the villages of Aşme and Çarıklı were to serve as a rehearsal for the attack of Kobanê, saying “A group tried to infiltrate our ranks around around midnight. We had only four people on this hill. But with our resistance we showed that no power is going to enter Kobanê.”

All Youth To The Ranks Of The YPG

Viyan Rustem, a battalion commander on the same line of resistance, stressed that Kobanê had a strategic role for Rojava. Rustem, drawing attention to Kurdish Popular Leader Abdullah Öcalan’s call for mobilization, said that people heeding this call had come from all four parts of Kurdistan to join in the revolutionary resistance, saying “we invite all the youth to come join with us.”

This entry was posted on July 14, 2014 by --- in Uncategorized and tagged AKP, Islamic State of Iraq and Sham (ISIS), Kobanê, Kurdistan, Rojava, Syria, Turkey, YPG, YPJ.