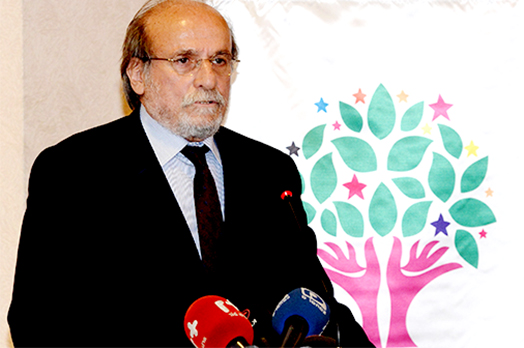 The Peoples’ Democratic Party (HDP), which is preparing for its general congress to begin on June 22nd, is anticipating major new developments before presidential elections this summer, according to an article in Özgür Gündem. The paper spoke with current HDP co-president Ertüğrul Kürkçü, who shared his thoughts on the future leadership of the party and stressed how the party would make an organization advance through representing all social stripes and colors.

Kürkçü also said that the party would hold a “crucial meeting” with Kurdish leader Abdullah Öcalan before the party congress in June.

Organization Advances in the HDP

The HDP, which includes a diverse base that embraces many different cultural elements in Turkish political history, will hold a general congress to begin on June 22. Together with the conference the HDP expects to strengthen its claim to be an alternative in Turkey and wants to be the address where all marginalized peoples, religious groups and minorities can find a common ground. HDP co-President Kürkçü gave important information about the process of the congress, the political situation through which Turkey is currently passing, and the HDP’s position on the upcoming presidential election.

Kürkçü, who noted that following the congress all of its organization structures in Turkey would be subject to a process of complete rebuilding, said that the HDP would once again experience a period corresponding to its founding from both a structural and compositional perspective. Kürkçü expressed his opinion that the general congress to take place this June would be a organization advancement and that together with the party leadership the HDP would go through changes at all levels.

‘There are suggestions, we will asses them’

In response to the widely anticipated question of who would be the HDP’s co-Presidents, Kürkçü said that the names most commonly mentioned now are Selahattin Demirtaş and Figen Yüksekdağ. However Kürkçü said that in order for a democratic process to develop it was first necessary for the congress participants to make such a  decision. Kürkçü noted that other suggestions could come to the fore but that he believed that the congress delegates would make the right and proper choice.

A Women Candidate Is Possible

In response to questions on his party’s position on the upcoming presidential elections, Kürkçü said that the HDP would put forward a candidate who would first of all work to find a solution to the Kurdish issue. Kürkçü emphasized that “for us it is important that it is someone who believes in her or his heart in the equality of all cultures” and that the party set a great deal of importance on finding a woman candidate. Kürkçü also added that they attend to announce their candidate at the general congress.

We Will Go To İmralı

Finally Kürkçü confirmed that a delegation from the HDP would leave shortly to meet with Kurdish leader Abdullah Öcalan who is currently imprisoned on İmralı Island and stressed the importance of the meeting for the party.