Tensions High In Ceylanpınar After Elections 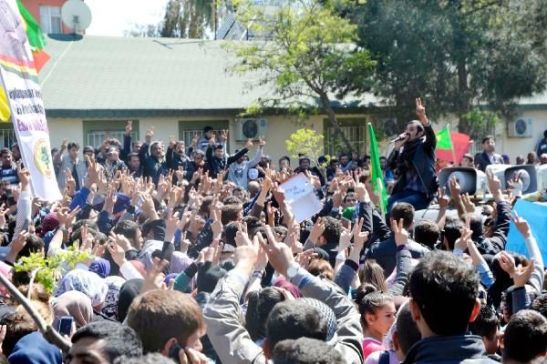 (ANF/CEYLANPINAR) Tensions are high in the town of Ceylanpınar, located in Urfa Province on the Turkish-Syrian following Turkish municipal elections March 30th.

Ceylanpınar forms a conurbation which the town of Serêkaniyê – on the largest towns in the Cizrê Canton of Rojava – and is also referred to as Serêkaniya Serxet, or ‘Serêkaniyê above the border.’

Tensions in the town stem from accusations of election fraud directed against the ruling Justice and Development Party (AKP), including allegations that ballots cast in favor of the BDP were burned. Thousands have gathered in the town center in front of government offices, while a large number of armored military vehicles have been seen in the area and checkpoints have been set up to control access in and out.

Police have attacked demonstrators with tear gas and water canons, with many including journalists reported taken to Ceylanpınar State Hospital.

Clashes were particularly intense in the Yenimahalle, Yenişehir and Cumhuriyet neighborhoods on Viranşehir and Gazi avenues. Military reinforcements have been sent to the area. Exact numbers of arrested and injured remain uncertain.

Local BDP officers have been surrounded by police, while local youth have set up barricades around the city. Much of the town has been obscured by smoke owing to fires lit by protesters and tear gas employed by police.

The district currently resembles an area under a state of emergency and detailed information is difficult to come by.