Asya Abdullah: In Rojava There Is A War Of Defense, In Syria A War For Power 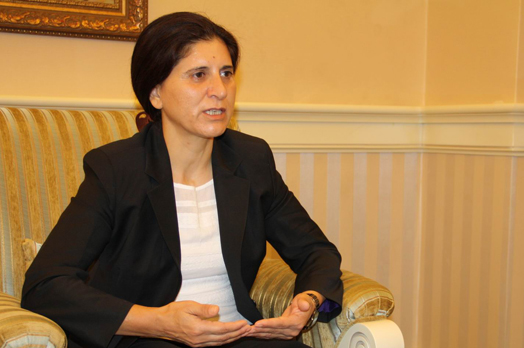 In a new interview from DİHA appearing in today’s Özgür Günden, PYD co-president Asya Abdullah – who is in Diyarbakir to mark Newroz celebrations organized by the DTK an BDP- spoke about the progress  of the revolution in Rojava and the recent attacks by the ISIS on Kobanê, as well as about the power struggle in Syria at large and the urgent need for a political solution. Below is a portion of that interview, translated into English.

‘No solution will be found through violence’

Abdullah began by stressing the need for an end to the violence and the implementation of a political solution in Syria, saying “This war will be hampered more by politics. No solution will be found through violence. This war mentality which is continuing in Syria between the Baath regime and the various gangs will not be accepted by the people in the long run. We the Kurdish people also do not accept this. Behind the war that has enveloped our region are political goals. Why then? The formation of the cantons and the construction of democratic autonomy is providing an example for the peoples of the country. But this has made everyone’s attitude clear. Autonomy means a complete alliance of the people of Syria, it expresses their will. It is a government of common life and self-government through the will of the people. There is peace, freedom and equality within this system. The people must respond united to all attacks.”

‘In Rojava there is a war of defense, in Syria a war for power’

Abdullah then spoke of the desire for peace in Rojava, and stressed that the fighting which was taking place in Syria signed a larger power struggle, saying “the war in Rojava is a war of defense, social defense. It is war of defense to prevent massacres against our community, the death of human beings, the destruction of cities, forced migrations, and looting and pillaging.”

Asya Abdullah went on to speak of the many different armed groups fighting in Syria, and questioned the motives of many, saying “according to our thinking the armed groups in Syria need to make themselves clearer. It is seen that those who say they are fighting for Syria’s freedom are not fighting for freedom. They are not fighting in the service of the Syrian people. They are fighting to empower certain political forces in Syria. The goal of the attacks in Rojava and Kobanê is install the Islamic State of Iraq and Sham (ISIS) in the lands of Syria. It is seen that those who say they are fighting against the regime in Syria are connected to the regime. However the deadlock between the various gangs in Syria many appear this deadlock is reflected in the Syrian soldiers. For this reason the attacks made against Kobanê reveal the cleavages within the gangs. These various gangs say that they are against the regime, they say that they are coming to power with their advances against Damascus, Dêrezor, and Lazkiye. But in recent days they have pulled their forces back from here and sent them to Rojava. And we ask asking: are they against the government in Rojava? Are they against the government of of Democratic Autonomy or are they against the Baath regime? They cannot fool anyone. The situation between the gangs and army in Syria has become clear. It is now clear which groups have what mentality and are getting what from the fighting.     The attacks made against Rojava are attacks against brotherhood. They are attacks against the revolution, peace and freedom. And I believe that in the same way they have failed to be successful they will continue to fail to be successful.”

‘Saudi Arabia openly supported ISIS, and later they proclaimed them to be terrorists’

Abdullah then criticized groups who claim to be on the side of the peoples of Syria and freedom, but who fail to live up to such claims in practice. She also drew attention the role that foreign powers were playing in the fighting, saying “where are the gangs in Syria coming from? When you look at the ID’s of those fighting against Rojava you find Egyptians, Tunisians, Afghans, Chechens and many other country’s nationals as well. How did they come here? How did they cross the border, and with what goal are they fighting against Rojava Kurdistan? It has been ascertained that the fingerprints of many foreign powers can be found on these attacks. The fingerprints of many different powers are on the fighting in Syria. Saudi Arabia, which until today and openly supported these forces, declared these forces to be terrorists in their latest statement. Well then why did you support them until now? Because these forces did not achieve any results. Their plans remained unresolved. Surrounding countries and in particular Turkey continue to support these forces. But we believe that this policy will not achieve its goal.”

Abdullah emphasized that it was not only Kurds who were sacrificing for freedom in Syria and taking unity as their principal, and that all the peoples had exhibited resistance and had close ranks around Rojava. Abdullah also stressed that the policy of foreign powers in Rojava and Syria had failed to achieve any results, saying “the war being carried out by these gangs in Syria continues to be without aim or purpose. The surrounding forces ought to reconsider their policies at this point. Our stance is clear. Our stance is on the side of peace and freedom and an understanding of autonomy based in a democratic government for Syria by all the people. This understanding continues to be on the side of the revolution. We are ready to be united with all those on the side of peace, freedom and justice. And we will fulfill this responsibility.”

One comment on “Asya Abdullah: In Rojava There Is A War Of Defense, In Syria A War For Power”

This entry was posted on March 24, 2014 by --- in Uncategorized and tagged Asya Abdullah, ISIS, Kurdistan, PYD, Rojava, Syrian Civil War.