YPG Calls For Mobilization Around Kobanê As ISIS Attacks Contınue 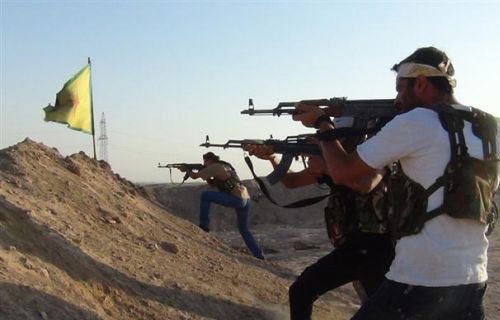 (ANF) The Central Command of the YPG has made a call for mobilization for the Kobanê Canton, which is under threat of occupation from renewed attacks by the Islamic State of Iraq and Sham (ISIS). The call extends to all three of Rojava’s cantons and asks the people of the region “to protect the values of democracy and freedom and support the YPG.” In a separate statement, YPG officials announced that in the ongoing clashes 13 members of the ISIS have been killed, including three high-level commanders.

The call for mobilization appeared on the website of the YPG’s Central Command, and announced that forces from the other cantons would be moved into the area to aid in the protection of Kobanê. The statement began “Today the Kobanê Canton is facing inhuman attacks from the ISIS gang.”

The statement went on to describe how the ISIS was composed of fighters from around the world and supported by many foreign powers, reading “[these powers] are remaining silent in the face of these inhumane attacks against a system built on a foundation of common life and democratic unity between our people and the peoples. In this respect we have no support other than our people and the weapons we have in our hands. Today these attacks and these powers are targeting our very existence. Either we will resist and clean our regions of these gangs or else we as a people will be under serious threat. As the YPG we are committed to resist until our last drop of blood and we will not take one step backward. We are shedding our blood for this sacred earth and we will continue to do so. We will continue to break these gang attacks and to teach them an historical lesson.”

The order for mobilization  also called on Kurds everywhere to step up their efforts, reading “Kurdish people, Kurdish youth, Kobanê is calling you to resistance. Today is a day of unity. In order for our flags to continue to wave in the skies above Kobanê we must leave our problems aside and protect our sacred lands. Wherever we are it does not matter, our eyes should be on and our hearts should be with Kobanê. This mobilization is a revolutionary push. Today is a day for self-defense, for the defense of values and the defense of land. It is a day for picking up weapons and for solidarity with the YPG.  As the YPG we are calling on all our patriotic people, let us mobilize to defend Kobanê and let us together write a legendary tale of resistance.”

In another statement issued by the YPG Press Center on the ongoing fighting around Kobanê it was announced that the ISIS’s attack began yesterday on three different fronts and that violent clashes took place as the YPG moved to stop the attackers. One attack took place on the villages of Cadê and Aşmê to the south of Kobanê and that a number of civilians had been wounded. Four ISIS fighters, including one commander, were reported to have been killed.

Another ISIS attack was directed against the village of Xiros to the south west of Kobanê. In the subsequent fighting 9 members of the ISIS -including the commanders Ebû Yûsiv El-Tenfîzî and Adem El-Şîşanî – were killed. The YPG also engaged ISIS units in the same region around the villages of Boraz and Didrmanê  in the same region and were able to destroy a mobile anti-aircraft unit. The ISIS has pulled back from these areas.

This entry was posted on March 19, 2014 by --- in Uncategorized and tagged ISIS, Kobanê, Rojava, Syrian Civil War, West Kurdistan, YPG.