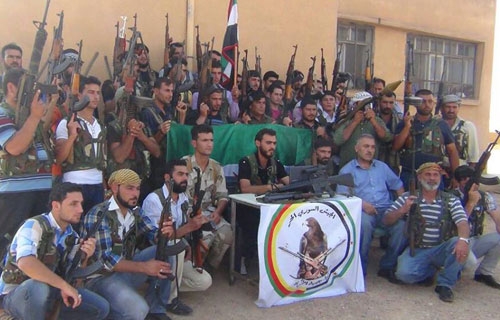 (ANF/SEYİT EVRAN – EFRÎN) El Ekrad Commander Haci Ahmet El Kurdî has spoken to ANF about recent developments in the Syrian Civil War, including about Turkey’s role in the conflict. Kurdî told ANF that Turkey’s attempt to destroy the gains made by Kurds in Syria that began 7 months ago in partnership with al-Qaeda and the al-Nusra Front has failed.

However Kurdî also emphasized that Turkey is looking for new angles in Syria, saying `Turkey is telling the remaining groups to go and make an agreement with the Kurds and to pull them into the war. It wants to provoke renewed fighting between Kurds and the Islamic State of Iraq and Syria and strengthen those groups still remaining in tact, and it wants to drive the Kurds from power.”

“Our goal is to not allow those coming to our lands and country from outside and those playing with our revolution [to accomplish this]. For this reason we as the El Ekrad Front were the first inside the Free Syrian Army (FSA) to fire at the ISIS. This fighting began in Tel Abyad. An important commander by the name of Ebu Mushap Şişani was taken prisoner. A group used this as an excuse and in the name of the mujahedeen it united the FSA against the Kurds. This decision was taken at a meeting which took place in Gaziantep under Turkish sponsorship and which FSA as well as ISIS officials attended. The Gaziantep meeting was organized to create a great alliance between these groups and the ISIS against the Kurds. And that is what happened.”

We Are Working To Defeat These Alliances

“The product of this alliance was to make all Kurds a target and above all in the area of Tel Abyad, Tel Aran, Tel Hasil, and Bab-Azaz. Of course Turkey was the main planner behind this and coordinated it. The goal was to drive all Kurds from that region and to create a Kurdish free zone. To destroy those resisting and to encourage those not resisting to work with them. There is information concerning these plans from reliable sources. In fact it was a plan for genocide. They did a part of it in Tel Hasil and Tel Aran. We realized their plan when the attacks began. But we had not realized how deep it went. When we realized this we pulled our forces from the region in order to prevent the murder of civilians. Because the military forces were the justification for the massacres. When we pulled back our forces it fell apart. There is information about those who worked with them and later returned [to our side]. They asked who decided to pull back the military forces and stopped. Many people could not put a meaning on our withdrawal. It was understood a classical pull back. In fact it was judged by some that we had abandoned the warzone. Some were pleased when they said this. If that plan had been put into action the direction of massacres would have turned toward Efrîn and Kobanê. It was a general plan that was to be implemented in pieces.”

The Plan Wanted To Make Kurds Into A Common Enemy

Kurdî went on to explain how the plan was an attempt to destroy both Kurdistan and the real revolutionary will in Syria, saying “Kurds demonstrated that they were a third-way together with the real revolutionary forces of Syria. The problem was here. For this reason international powers and some Kurdish collaborators did not accept this and wanted to break it. In fact they wanted to put an end to the Syrian Revolution.”

They Came Face To Face

“As Kurds faded from the scene they went after each other. They began a war over power and how it would be shared. They all wanted to be in power. In order to be in power the ISIS destroyed all smaller groups. They allied with groups such as Liva Tevhid and Ehrar Şam that claim to be larger. The situation of Ehrar Şam was different. This group and the al-Nusra Front are coming from the same source. That is to say it was a group with roots in al-Qaeda. Either it attached them to itself or it destroyed them. And here in an important way Turkey supported the ISIS, increased its size and provided it with every kind of possibility.”

Turkey Is Reaping What It Has Sown

“The Bad area is a large area. Turkey put this region under the control of Turkmen groups. However the ISIS took those areas from them in two days. In fact it was be more correct to say they surrendered themselves to them. At only one place in the region there were 800 Liva Tevhid fighters. They surrendered this area to the ISIS without fighting a thousand or eight hundred shots. Turkey is mentoring them. Turkey wanted them to surrender without fighting. Because Turkey founded Liva Tevhid. But later the ISIS came to such a point that now they do not attach themselves to a Turkey giving them endless support. The ISIS finished the Liva Tevhid without fighting. Groups from the Tevhid were put into combat against the ISIS and were liquidated but the leaders of the Tevhid did not make a single statement. The Tevhid and other groups mentored by Turkey have been reduced to this.”

Kurdî went on to discuss the situation along the border, the increasing strength of the ISIS in important sectors – such as the zone between Tel Abyad and Azaz saying “Turkey came to realize this when they saw the strategic areas in which they had established Turkmen and groups like the Liva Tevhid along the border attacked and taken over by the ISIS. Turkey wanted to protect that area with these groups. However the ISIS began to attack those regions. They started an attack on the very strategically important town of Çobanbey. They took Çobanbey in two days. Turkey was telling Liva Tevhid and the other Turkmen group there to do what they wanted and that they would give them what was necessary but to protect those areas. They used planes to support them. They gave around 40 rockets and some rocket fuzes. But the ISIS took that place in two days. Those groups left all the weapons and rockets Turkey had given them without fighting and fled. Now Turkey is reaping the harvest. The ISIS which it had supported and grew turned against the Turkmen groups in the FSA under its own control. They took the villages of Çobanbey, İğde and Hawar. These villages were very important places for Turkey. That is as things are now Turkey and the ISIS share a border.”

Turkey In Search Of New Alliances

Finally Kurdî explained that as Turkey has lost all its old allies it is now in pursuit of new ones, saying “Now Turkey is planning a new game. Turkey is telling the remaining groups to go and make an agreement with the Kurds and to pull them into the war. It wants to provoke renewed fighting between Kurds and the ISIS -and strengthen those groups still remaining in tact. It wants to drive the Kurds from power. This is certainly happening through the hands of intelligence officers In fact intelligence officers are swarming around the region. Some of those were shot in attacks directed against us.”