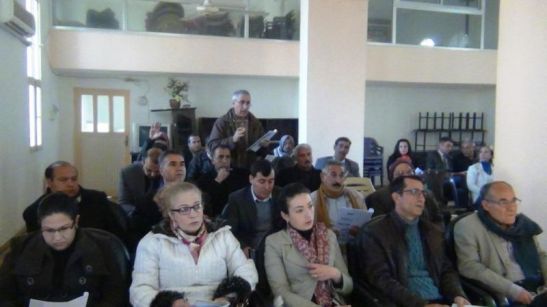 (ANF) In the Kobanê Canton of Rojava, preparations are underway for an official declaration of a Democratic Autonomous Government to take place this coming Monday, January 27th. Kobanê is one of three cantons in Rojava. The Cizirê Canton officially declared itself autonomous earlier this week on January 21st. All three cantons will have their own local legislative council as well as a government composed of 22 ministries.

The decision to declare autonomy this coming Monday was taken at a meeting of the Kobanê Canton’s Legislative Council of Democratic Autonomy. The council, which had been meeting to assess the progress of the project of autonomous government thus far, came to the decision today. Today’s session, which 61 delegates attended, began with  a moment of silence to remember thus killed in the struggle to establish autonomy in Rojava.

Although the session was closed the press, it was reported that delegates discussed changes in the governing council, election law, relations with the Cizîre canton, and changes in the procedures of the Legislative Council. The election law was approved in the course of the meeting and a three-person committee was formed in order to look at updating the procedural rules of the Legislative Council. The delegates called on all the peoples, faith groups and social groups in the Kobanê region to support and work towards the project of autonomy.

After Cizîre and Kobanê, Afrin

Following the announcement that autonomy would be officially declared this coming week, celebrations began in front of the local headquarters of the Syrian Kurds Democratic Party. Attention will now turn to the Afrin Canton, which will be the last of Rojava’s three cantons to officially declared its autonomy. The decision to divide the region into three cantons was taken at a meeting of the Legislative Council of the Autonomous Government of Western Kurdistan at a meeting between January 6th and 7th. Each canton will develop its own autonomous administration based on four main pillars: the canton system, the legislative council, the government, and the Supreme Election Committee.

All the peoples of the region, such as Kurds, Arabs, Assyrians/Syriacs, Chechens and Armenians, will have representation in the Legislative Council. Moreover the system will be based on a decentralized model that continues to consider Rojava as a part of Syria.

The declaration of autonomy in Cizîre is being celebrated by Kurds around Kurdistan and in the diaspora.

This entry was posted on January 24, 2014 by --- in Uncategorized and tagged Kobanê, PYD, Rojava, Syrian Civil War, Syrian Kurdistan.