The PYD and YPG are Not Just for Kurds, But All the Peoples of Rojava 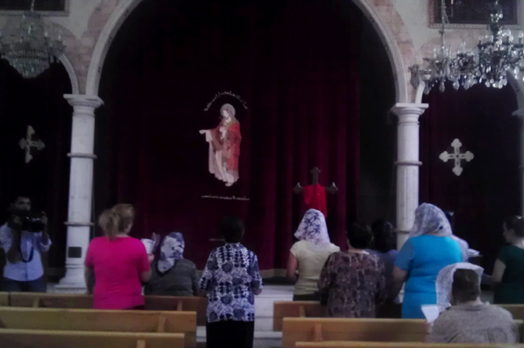 Last week we posted excerpts from the first part of an article by Zübeyde Sarı – “The Revolution in Rojava Smells of Clover.” Below is part II of that article, which first appeared in Özgür Gündem, translated in its entirety:

A peaceful sound is coming from inside. There is a mass. Outside there is the sound of shooting.The sounds of shooting and the mass mix. As do the emotions.

The Syriacs left Serêkaniyê out of fear of al-Nusra. After it fell to the YPG many returned. Syriac women explaining the time when al-Nusra took over the city begin thus: “We were afraid. We couldn’t go outdoors, we had to stay shut up at home. Later they show me the damage al-Nusra inflicted on the church.

The broke apart the donation boxes and stole the money and even the church’s air-conditioners. The sprayed countless bullets over the church’s walls. They wrote graffiti insulting Christians.

The YPG which has taken Serêkaniyê under its administrative control is working so that all peoples, languages and religions can live together. “The YPG youth came dancing halays. They rang our churches bell and we understood that this was a call to worship.”

After the city fell under YPG control everything changed. “We were more comfortable than before” said the Syriac women…that they feel same is obvious from the fact that they are now wearing sleeveless dresses.

There is a child in the church’s garden and in his hand is a box. He holds the box very tight as if he was holding his mother’s hand. Inside are bullet casings. “What will you do with these?” I ask him. “I will sell them and make money.’

After the YPG fought off al-Nusra and took control of the border crossing they left it under the administration of the civilian People’s Parliament. However the YPG commander says that because of “extraordinary circumstances owing to the war, the strategic importance of the crossing, and the fact that al-Nusra has continually made the area an objective it returned to the administration of the YPG.”

Between YPG fighters and Turkish soldiers there is no distance. If they reach out they could touch each other they are so close. “Do do they never talk and say hello to each other” I ask. “No,” says the YPG commander, “They never say hello or speak to us. We do not speak to them either. However we told them many times that we do not have a problem with Turkey.”

When the fighting first broke out I was in Ceylanpınar. Then Serêkaniyê was not under the control of the YPG. In fact there was almost no border line between the city and Ceylanpınar. People could come and go to Serêkaniyê very easily. You could see someone in the center of the Ceylanpınar market who a couple of minutes ago you saw in Serêkaniyê. After the YPG took over the border crossing I went back to Ceylanpınar. The changes I saw startled me. New razor wire was going up on the border, security was increasing and ditches were being dug. A bird could not even fly across.

I asked the YPG commander if there was a changed after they took control of the border crossing: “al-Nusra was getting all of its aid from this border crossing in Turkey. Actually we are not fighting with al-Nusra here, we are fighting with Turkey. After the border crossing fell under our control a bird could not even fly across. Because as soon as the Kurds begin to succeed anywhere, in any shape or form Turkey does everything to make sure it does not happen. But we are never going to abandon this place. Even if there is just one of us left.”

Rojin is a female fighter in the YPG and I feel like I have known her for years even though we just met. “Are you afraid to go to most forward positions on the front” I ask. Rojin’s response drives into my head like a nail: “For us fear is a very foreign emotion. We left everything behind us. The only thing that is important to us is the freedom and rights of the peoples of Rojava. Do you see that place over there? We go over there and fight and then we come back here and continue drinking tea.”

Dijwar brings us to the place where the YPG and al-Nusra have come basically face to face. Of course this isn’t that easy. “It is very dangerous there, there are snipers” he says as a warning. There was no one who wanted to bring us to this place. After we insisted for a long time they did.

When we got there some of the YPG fighters were taking a tea break. That the majority were women again surprised me.

I told the YPG commander that I wanted to go to the most forward position. “Impossible” he said as he began to enumerate the reasons, “There are snipers everywhere. If something happens to you hear I will not be responsible. We will not put the lives of our special guests in danger.”

But after insisting for a long time it bears fruit and we get up to go to the forward position. The YPG fighters were are walking in front of me show me the places where it is necessary to duck. “You can come into a sniper’s field of vision at any time, stay low’ they say. And every time I feel myself losing it inside. I feel like death is breathing down my neck, but I am determined and telling myself that I need to go and that I need to see I am resting my fear.

And we are there. There is 300-meter distance between the YPG and al-Nusra. They watch each other day and night, their fingers on the trigger, waiting and ready for a fight at any moment. Two days before we went there were violent clashes, a number of YPG fighters were wounded and 15 al-Nusra members were killed. Where we are looking, in the empty space between the two villages, two corpses are visible. The YPG commander says that “The place where the bodies are is in the open, I mean it is in our field of vision and they are afraid to go and get them. If they go and get them we would never touch them. We always have respect for the dead. When I hear the sound of small arms fire I throw myself on the ground. “There could be a fight here at any moment, it is very dangerous” they say and they lead me back away.

The Revolution is Walking Forward with Determination

I returned from Rojava with a garland of clover around my neck,  the steady faith that women had the power to change the world, and the pride of female journalist who had gone from Turkey to Rojava.

In order to understand Rojava not from afar but to and experience it, to live it, gave me a lot. As I left from there I understood that things were different that I saw from a distance. To see the reality one needs to get inside life there and to feel oneself in that place.

In Rojava a revolution is taking place. It is a revolution that includes everyone from seven to seventy. The people of Rojava are taking ownership of their past and their present and they are building their own future. The PYD and YPG are not just for the Kurds, they are working for the freedom of all the peoples of Rojava.

Rojava is walking determinedly on the path of revolution. No power will subvert them, or take their identities, their values and their believes from them. Rojava has found itself and with its gains it will win all four parts of Kurdistan. Nothing will be the same again….

Arabs Fighting with the YPG

One of the YPG fighters at the place we went to see the fighting draws my attention. He has dark skin, tattoos written in Arabic and stands our for his serenity. I ask Rojin who he is.

“Salem” she says introducing the man. “Salem is an Arab who fought with al-Nusra and later he joined us. He is married and has two children. In order to build a free future for his children he is fighting with us.”

I speak with Salem and and when we speak I see more cleary hat the clashes between the YPG and al-Nusra are not – as some people would like to represent them – clashes between Arabs and Kurds.

Salem knows Kurdish very well and tells his story: “I fought together with al-Nusra. However after a short time I realized that they had no interest in the freedom of peoples of Syria. They were in search of loot. They were burning and destroying and killing. The thing that really made it concrete for me was that when any of my friends were hit they didn’t even stop and look. They didn’t attempt to retrieve the bodies and made no effort to save the wounded. My concern is the freedom the peoples of Syria. The YPG is fighting from the freedom of the Syrian peoples. For that reason I am here.

Hasan is another Arab fighting with the YPG from Aleppo.He is only 17. He doesn’t know any Kurdish. He speaks with YPG fighters who don’t know Arabic through a translator. He is reserved, calm and very shy. He says he has taken the name Azad and asks that I address him using the name Azad. Timidly he explains why he joined the YPG.

“I witnessed the activities of the YPG in Aleppo. I saw that they did not discriminate among Arabs, Kurds, Christians, Armenians and Assyrians. The YPG is struggling for freedom. All of us in the YPG are fighting for the liberation of the peoples of Syria. There are many Arabs in the YPG, and Arab battalions have been formed. Everywhere I go I meet Arabs that have joined the YPG.”